HomeAll PostsBilingüismoCARNIVAL 2017. MARDI GRAS FROM THE LADY WITH... 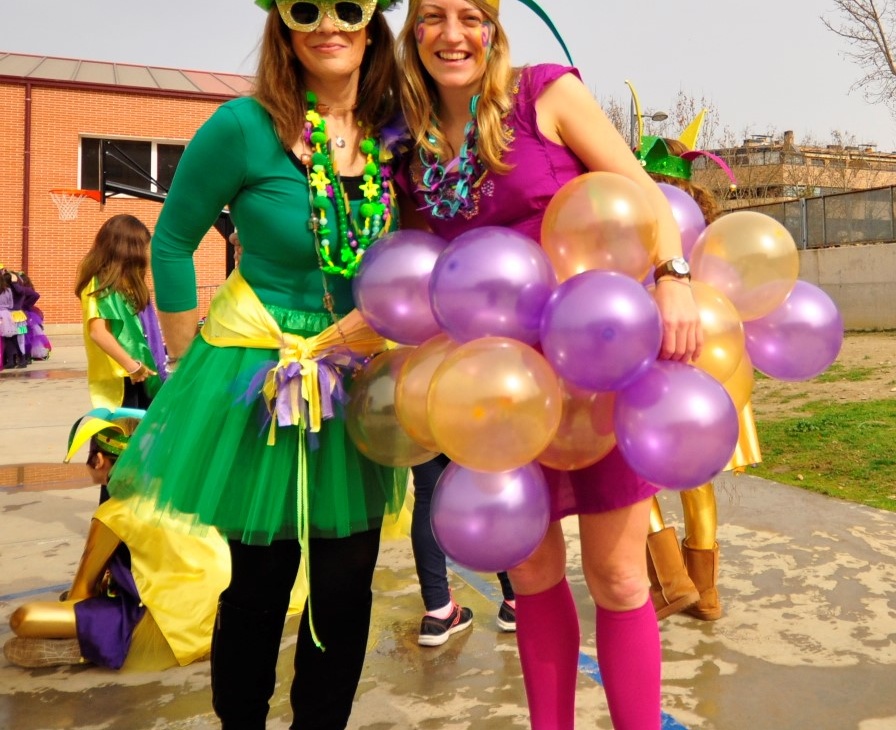 The procession continued with every grade strolling down the center of the street in one of the 3 traditional colours of Mardi Gras.

There were incredible homemade hats and painted masks made from handprints or paper plates and tutus were everywhere. The teachers had gone wild as well: adorned with bow ties, lei’s (floral necklaces), homemade skirts, waistcoats, overalls, extremely bright wigs, masks and much more.

As I was able to walk alongside all of the grades I got to see each group as they passed their proud families, taking photos and waving.

Whole classes danced and spun as they made their way down the road; their golden tassels flying out behind them. Another class, from infantil, were dressed as 1920’s ‘strong men’ (and women) with large moustaches, 100kg weights and muscles bulging. One grade were fire breathing magicians in green stripes and flowing capes. The fire billowing from their mouths was cleverly made of cardboard and attached to a stick: authentic without being a fire hazard.

And the youngest classes looked like a purple garden, with floppy petal hats and long crape dresses and even brightly stickered water bottles.

The school’s mascot, ‘Charlie’ was pulled on a very ornate float, led by a human sized version of himself (a very sweaty sixth grader in the mascot outfit) and a giant fish!

The procession ended as we entered the playground, but for us the party had only just begun.

Leading up to this event, most mornings before school started, a particular song had been played over the loudspeaker many, many times. It has mainly non verbal lyrics and the tune is very catchy. I thought it was always being played because it was the music teacher’s favourite song or maybe a more sinister indoctrination was happening.

However my questions were answered in the next 10 minutes when the entire school broke out into a choreographed dance accompanied by that very song “ide ide ideoooow”. The infantil classes stomped their feet to the rhythm, the different grades spun around in a storm of colour, and smiles radiated from everyone, even the very serious auxiliares.

The terrific day came to a close with dance competitions, a million photos of teachers with their classes and some very long conga trains.

From the anticipation and preparation of this carnival, the procession down the street in incredible costumes, to the ‘Fiesta’ in the playground which followed: this day will be in my memory for years to come as a spectacular event, and one I was so lucky to be a part of.